Mycelial networks are at the heart of land-based life on this planet, they are small threads of fungi that connect the roots of every tree in a forest, every plant in a crop, and without mycelium we would not exist. One of their many functions is to bridge the gaps between resources and plants, allowing roots to access nutrients that they need to survive, and even sharing nutrients between different plants like a community bank — tracking which trees owe how much nutrient to each other, and balancing the sums over time. These networks have been called the “wood-wide web” because they are so large and complex that they look like neural networks, or the nodes of the internet.

I was first introduced to mycelium by Paul Stamets; we were attending a gathering together on a remote island in British Columbia called the Summer Gathering at Hollyhock. His research is the stuff of science fiction — in fact, a lead character in the new Star Trek is named after him — and Paul’s perspectives on mycelial networks profoundly shook my perspective. At one point he was explaining that these mycelial networks are capable of complex intelligence and communication; for example, they can recognize when a threat has entered a forest and is attacking certain trees, and will relay that information to trees in the surrounding area and then divert resources to them in order to help them defend themselves (e.g. extra nutrients to modify their bark structure, or produce an icky chemical). In some ways you can almost think of large mycelial networks as another form of consciousness, a distributed and vast brain residing underneath forests, capable of complex intelligence…just at a slower pace than we are generally able to perceive.

But what struck me most about these mycelial systems is how they facilitate the sharing of resources between different plants, how they allow them to organize and react together to threats, and how the system is fully distributed — impossible to centralize or control. 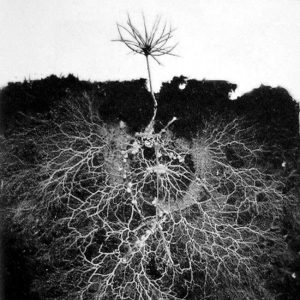 Open source software is unique because it is fully distributed, the codebase is available to anyone in the world to use, copy, or modify. That’s why open source technology develops faster than privately held systems, they’re capable of building entire ecosystems whose individual participants contribute to a greater whole and, in turn, receive more benefit as a result. Most open source technology is cryptic to people who aren’t computer programmers, but there are some examples that are familiar to the general public and have profoundly shaped our world — for instance, WordPress/Drupal/Joomla are open source website builders than led to a proliferation of websites on the internet, we wouldn’t have anything even remotely close to our modern internet without open source technologies like them.

The reason most technology is not open source is that the engineers want control; there is a lot of money to be had by restricting access to a popular piece of software and charging people for access, or selling access to the people who use that software to companies who want to manipulate the users. Those of us in the United States have been fed heroic stories of Übermensch who “pulled themselves up by their bootsraps” using their own unique brilliance, became the masters of their destinies, and gain control over the fate of the world. We’re told that control is the ultimate value — control yourself, control others, control nature, control resources, control destiny. It’s this sort of arrogance that has brought about cancerous plagues like world wars, climate change, and grotesque wealth hoarding. But, I don’t think this is our inherent nature, and I think we can evolve beyond these base instincts and paranoid delusions.

What open sourcing, as a movement, has demonstrated is that we all benefit more when technologies and ideas are released into the world without the limitations of control. When we step back from the narrowness of an individualist perspective and view the world as a vast, interconnected system, then we are able to change reality in more profound and valuable ways. By giving up the delusion of control, we actually become more powerful, and we all benefit more.

Houdini Project is a synthesis of these ideas, one that started several years ago listening to Paul Stamets describe the systems that contribute to a healthy forest — it comes from the realization that healthy human societies require the same fundamental structures. We need infrastructure that allows us to share and distribute resources, organize ourselves into complex groups, respond to threats, and do all of these things free from outside control. We something akin to a mycelial network for the forests of humanity.

It occurred to me that we had built a great deal of that underlying technology at my company, CommitChange, but that it needed some modification and it couldn’t be controlled by a single entity. So we decided to do something unprecedented, and we became one of the first investor funded startups to open source our technology, despite having an attractive acquisition offer on the table from a billionaire. We decided that releasing our technology to the world, and making modifications inspired by mycelial networks, had the capacity to change the world in more profound ways than a single tech startup could ever hope to achieve. So we declined the acquisition and started the long journey toward making our codebase public, and modifying the technology so that it could facilitate these loftier ambitions.

Now the first version of it has launched and is powering large scale movements like WeMove.eu in Europe. We have a lot of work to do in terms of making the project more accessible, and helping people understand how it an be applied to solve challenges, but I’m sitting here today more excited than ever about the implications of what we’ve done so far, and what will become possible in the near future.

Paul, if you ever see this, thank you for introducing me to the web beneath our feet and for changing the way I see our world.

Roderick Campbell is the CEO and Founder of CommitChange, and a Co-Founder of the Houdini Project. He works with hundreds of organizations throughout the world to build stronger societies.

Your email is safe with us.